Primal Services Can Be Installed “Virtually”

Traditional telecommunication software products were dependent on the installation of the physical hardware dedicated to performing a single task. This type of setup led to the inefficient use of resources, increased the overall system complexity, and often resulted in significant downtime in the case of unexpected hardware failures.

Virtualization has eliminated many of these shortcomings by allowing Primal to run multiple operating systems on a single server. Taken a step further, it has also allowed for the pooling of multiple servers to increase system redundancy, flexibility and scalability. The benefits of virtualization are similar to that of hosting services on the cloud with the added benefit of keeping products in-house, leading to greater control and security.

The Key Benefits to Primal Virtualization include: 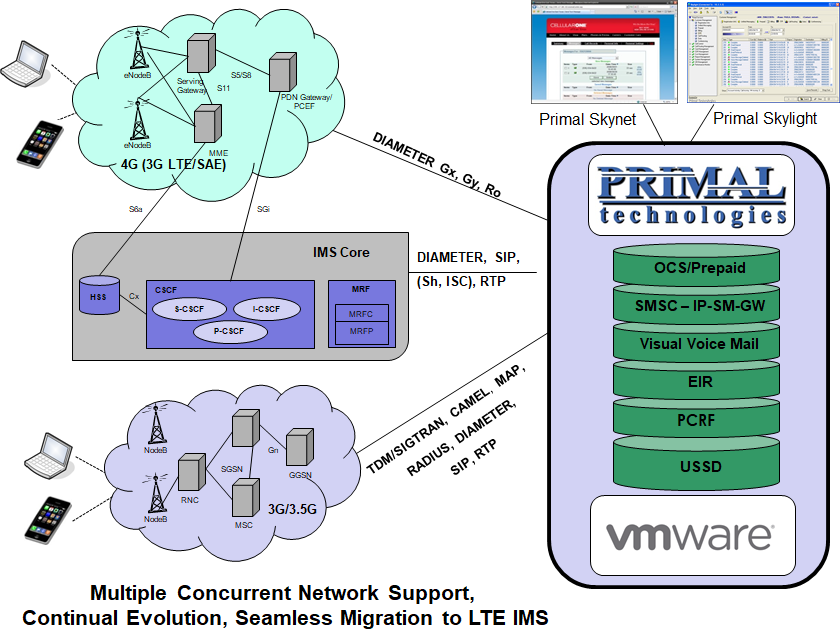 Primal's preferred vendor of choice for virtualization is VMWare. VMware software provides a completely virtualized set of hardware to the guest operating system. The VMware host provides pass-through drivers for guest USB, serial, and parallel devices. In this way, VMware virtual machines become highly portable between computers, because every host looks nearly identical to the guest. In practice, a system administrator can pause operations on a virtual machine guest, move or copy that guest to another physical computer, and there resume execution exactly at the point of suspension.

VMware Workstation, Server, and ESX take a more optimized path to running target operating systems on the host than that of emulators (such as Bochs), which simulate the function of each CPU instruction on the target machine one-by-one, or that of dynamic recompilation, which compiles blocks of machine instructions the first time they execute and then uses the translated code directly when the code runs subsequently (Microsoft Virtual PC for macOS takes this approach). VMware software does not emulate an instruction set for different hardware not physically present. This significantly boosts performance, but can cause problems when moving virtual machine guests between hardware hosts using different instruction sets (such as found in 64-bit Intel and AMD CPUs), or between hardware hosts with a differing number of CPUs. Software that is CPU agnostic can usually survive such a transition, unless it is agnostic by forking at startup, in which case the software or the guest OS must be stopped before moving it, and then restarted after the move.

The use of virtual machines has simplified the base environment of the Primal Services which has allowed Primal to put more focus than ever on the development of our software to meet the ever-changing needs of our customer base. It has also greatly reduced the Primal software footprint leading to savings in both hardware costs and reduced power consumption. As an example, a network requiring Prepaid, SMS and Visual Voicemail may have required up to eight physical servers in the past. This has now been reduced to as little as two, while increasing redundancy and reliability.

Primal Technologies, with a successful 20+ year history, is a leading provider of Converged Prepaid and Value Added Services for mobile, landline and cable operators.

Primal offers a broad and feature-rich portfolio of advanced VNF services for wireless and VoIP operators worldwide serving many types of networks.